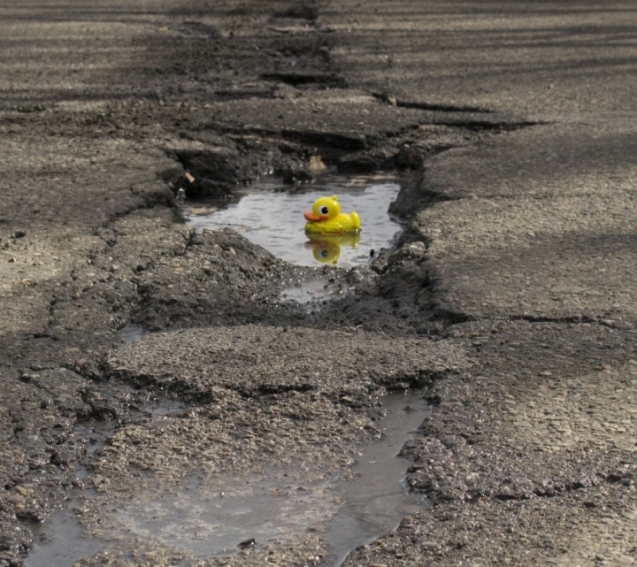 In my family, the word “pothole” takes on a whole new meaning.  When it is uttered, it is used as much affectionately, as it is seriously.  This all stems from a theory I have:  When you are born, the life ahead of you is like a new road.  Like a new road, the way is strong and solid.  But as you live your life, the weight of metaphorical cars and trucks, combined with the, likewise, metaphorical changes in weather, cause potholes to develop.  This makes the road of life more difficult to traverse.  So, we fill those potholes in order to continue on our way. Some of the things we may fill them with include: work, food, exercise, religion, anger, alcohol, drugs, spending, etc.

Just like materials that are used to fill in real potholes, some things work better than others.  However, some may even cause the pothole to get worse.  The most important point to remember, is that once that pothole is there, the road will never be as solid as it was before the pothole was created.

Furthermore, as you continue through life, you may find yourself on the same road, stopped by the same pothole that has once again come uncovered.  The key is to understand that you will need to do the work again and again to fill and refill that pothole so that you can continue to get on with your life.  A simple example of this is if you lose someone close to you and after years have passed, you hear a song or smell something cooking in the kitchen and . . . BAM! . . . it brings you right back to where you were.  All the work you did to get past that event comes undone and you have to do it again.  Perhaps it’s not as difficult as the first time, but, nevertheless, there is that pothole again and once again you need to do the work.  These potholes from your past are what often makes raising children the most challenging.  You are not only dealing with your child’s issues, you are dealing with your child’s issues through the memory of your own.

One amusing story I’d like to share with you is about a personal pothole that I have that came uncovered when my son was about four years old.  I had given him and his sister several toy catalogs to search through in order to come up with a list of toys that they wanted for Christmas.  I did not have many toys when I was a child, and as a result, it was hard for me to say “no” when there was a toy that they wanted.  But when my son came to me with a hopeful smile on his face and a Christmas list with eighty some odd items on it, I felt the walls of my pothole crashing in upon itself.  How could I possibly make him happy on Christmas morning with so much on his list?  I knew he would be looking for everything on that list since, “It doesn’t cost Santa anything to buy the toys he leaves under the tree.”

Luckily for me, there was a Christmas cartoon on that year about a boy named Jeremy Creek.  The boy had written a Christmas list so long that when Santa got it, he thought “this surely can’t be all for just one little boy, it must be for a town.” When Santa looked on his map he found the town, Jeremy Creek, and realized that the poor children in that town had been forgotten for years.  So on Christmas Eve, he delivered all of Jeremy’s toys to Jeremy Creek, the town.  On Christmas morning, Jeremy woke up to see that there was nothing under his tree.  Feeling angry and disappointed, he turned on the television and a news story appeared about a town named Jeremy Creek who had finally been remembered by Santa. Jeremy was a smart little boy and he figured out quickly that those were supposed to be his toys.  At first he shouted at the T.V., angry about the mix-up, but as he watched the children play with the toys, he realized that he had made all those children happy.  It seemed that “giving” was even better than “receiving,” and Jeremy ended up having the best Christmas ever that year.

So, after watching that cartoon, I told the kids that they could only put the amount of items on their lists that matched their age up until the age of ten, with a maximum amount of items set at ten.  This way I could be reasonably sure that I would get them something that they really wanted.  Unfortunately for my son, after watching the cartoon, my daughter and I nicknamed him Jeremy Creek.  And over the years, as he never seemed to be satisfied with the toys he had and always seemed to want more, we sometimes would remind him of that cartoon and his face would turn red and his lip would quiver and he’d say, “I am not Jeremy Creek!”   I believe this may have became his first pothole!