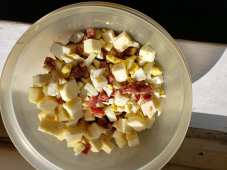 The story behind the dish:  The recipe came from Rosie Tucci’s sister-in-law.  Rosie’s Uncle Frank’s wife, Fanny Maletta Tucci, made it for Angelo and Teresa Dodaro when they first came to America in 1924.  Grandma Teresa told her daughter, Gloria, that it was their first meal in this country.  Rosie’s parents were Vincent and Nunziata Tucci, they came from Calabria.  The two families (Dodaro and Tucci) were Paisans in Italy.  They were friends but not related.  Grandpa Angelo Dodaro made this recipe for the family many times over the years.  According to his daughter, Gloria, he was a very good cook.

Recipe according to Cousin Richard Dodaro with corrections by Aunt Gloria in parentheses.

Soppressata (Aunt Gloria says it was hard piccolo salami, cut off the heal.)

Cut up mozzarella into little squares.

(Use same meatball recipe to make large meatballs to put in when making sauce.)

Take a large turkey roasting pan with cover and line the bottom with sauce (enough so that the sauce doesn’t burn).  Put meat on top of bottom layer of sauce.

Boil 2 lbs of macaroni al dente.  Very important that the macaroni is al dente.  Only boil for a few minutes.  Throw macaroni on top of sauce.

Put more macaroni and mix it in.

Alternate layers of macaroni and mixture.

Put in oven with cover on.  350 degree Fahrenheit oven.  Occasionally take cover off to see if pasta piena is bubbling.  When it does bubble, scramble two raw eggs, add water and pour on top with a spoon.  Then with a fork, push it in.  Cover and wait until it comes to a boil again.  Now it’s done

In a sauce pot:

A couple of pieces of onion

Add a couple cans of water

Bring to a boil while stirring.

Boil for an hour to an hour and a half.