I don’t remember what movie it was, but I remember the first time I went to a movie theatre.  My oldest brother, Tom, took me to the Grand Avenue Cinema in Baldwin.  I was probably about four years old, which would have made him about eighteen.  There was popcorn, the smell of butter, the taste of salt.  There was a long aisle with large seats lining each side and a giant movie screen in front of me.  I remember the feeling, as if I were special.  Getting to do something I had never done before and being taken there by my older brother whom I adored.

It was many years before I went to an indoor theatre again.  My father preferred to take us to the Sunrise Drive-in.  My younger brother, older sister, and I got to play on the swings in front of the enormous screen until it got dark.  Then we’d pile into the back of the car and my father would latch the speaker we were parked next to onto the open driver’s side window.  My mother must have brought our pajamas, because I remember being in them while watching the movie.  She also brought snacks and drinks, we never bought popcorn because it was too expensive. Once the sun went down, the speaker came alive with static and the commercials hopped across the screen.  The Drive-in always had a double-feature and the movies my father chose always seemed to be horror movies.  Yes, horror movies.  For years, when I said my prayers at night, I would pray to forget the movies.  But praying each night to forget them, only serves to remind yourself of them.  It doesn’t work.

One movie was The Power.  This guy had the ability to control others with his mental powers.  He could make people believe things were happening to them.  I remember one scene in particular, a man is in a room and slowly the windows and door disappear.  Then he starts to choke and dies because he can’t breathe.  Later his body is on a gurney in a hospital and someone pulls off the sheet to expose his face, tongue hanging out and eyes bulging.  Just lovely.  There was another movie with a big house and a man killed his wife by drowning her in the sink while she was washing her hair and then he buried her in the backyard.  Then one night he’s in the house when he sees her walk past the window.  He leaves the house to search the surroundings, then from a distance, he sees the lights go on in the big house, one by one.  He re-enters the house and watches in horror as his dead wife walks toward him, descending the stairs. The last one I remember took place on an island where people were experimented on and turned into half human, half wild animal.  There was this one lady, who I think was the wife of the guy performing the experiments, and at the end of the movie, she unravels cloth that is wrapped around her head to reveal that she has the eyes of an owl.  Terrifying.

The next time I remember going to see an in-door movie, I was about thirteen.  My parents took my younger brother and me to the Merrick Gables to see Lady and the Tramp.   The Merrick Gables played older movies for something like a dollar per person.  But I have to say that since that day, it has been my favorite Disney movie.  Love this movie! 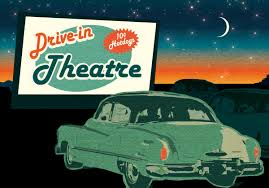 Theresa Dodaro is the author of The Tin Box Trilogy.  http://www.theresadodaro.com