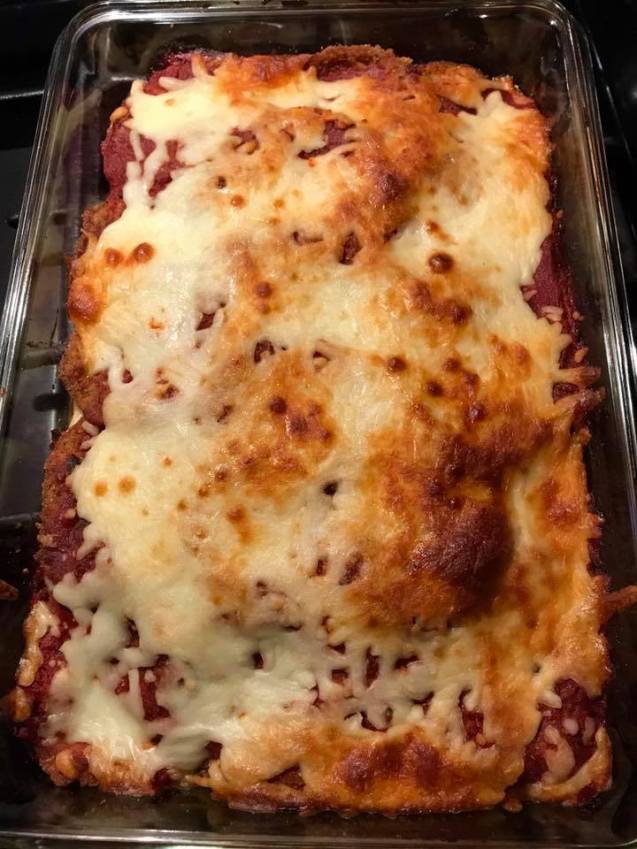 Mix meat together with a fork in a large bowl until meats are evenly mixed.

With a tablespoon, scoop up meatball mixture and mold into 1 ½ inch diameter meatballs.

Sprinkle water in to oil, when it starts to sizzle, the oil is ready

Brown meatballs turning as they cook. Cook through so that you can have the treat of sharing the meatballs with the kids before they go into the sauce. (Always a treat for us as wewere growing up!)

Line large bowl with paper towels. As the meatballs cook, take them out of the oil and lay them in the paper towels to absorb the extra oil.

Use ten meatballs for the sauce and freeze the rest for the next time you make sauce.

I use sweet pork sausages, without fennel seed.

Use same oil that was used for frying meatballs. Set another bowl aside lined with paper towels for sausages.

Take browned sausages and place on bed of paper towels in bowl to absorb excess oil.

2 twelve oz. cans of Tuttorosso Crushed Tomatoes (The blue can is chunkier than the green can; I usually use one of each. If you can’t find Tuttorosso brand, you may need to put cans of chunky crushed tomatoes in a blender so that they are not so chunky unless you like your sauce that way.)

Add ½ a cup of sugar (maybe a little less but the key to a good sauce is a salty and sweet taste at the same time.)

Cook (all the way on low) for 4 to 5 hours, stirring occasionally

Cut into thin slices (I use a meat slicer to cut them thin and evenly).

Brown eggplant in Canola Oil on stove till lightly brown.  The eggplant will bow up when the side is done, then flip it over and brown the other side.

Take a casserole dish and line the bottom with red sauce.

Then lay fried eggplant slices on top of the sauce, overlapping slices.

Then spoon red sauce on top of eggplant.

Then add mozzarella cheese on top of sauce.

Add another layer of eggplant slices.

Bake in oven at 350 degrees for ½ hour or until the cheese on top starts to brown.

Then dip in egg substitute (less messy than eggs)

Then dip in breadcrumbs

Place breaded and fried chicken cutlets on the dish.

Spoon some sauce on top of cutlets.

Bake in oven at 350 degrees for 30 minutes or until cheese is bubbly and starting to brown.

Theresa Dodaro is the author of The Tin Box Trilogy:  http://www.theresadodaro.com