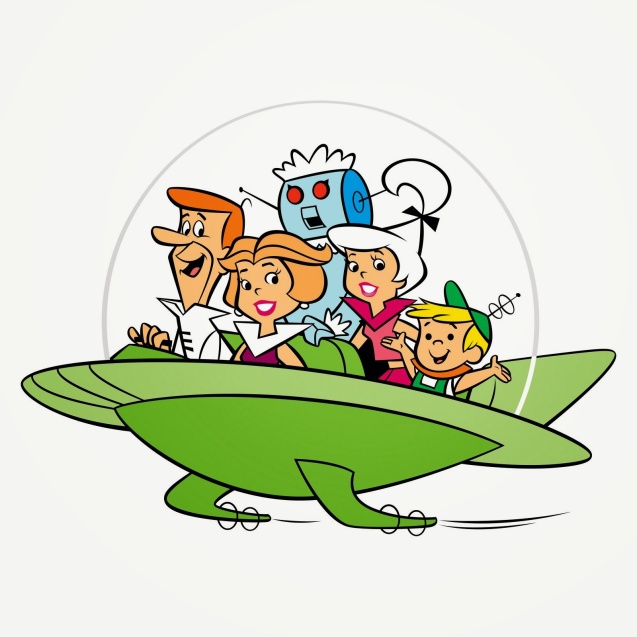 I remember a time, it must have been around 1969 or 1970, when my sister and I were young.  We were huddled together in bed, talking to each other, late into the night. Perhaps it was New Year’s Eve?  I remember that I was eleven and she was fifteen and we were imagining the future and calculating how OLD we would be in the year 2000.  We realized we would both be in our forties and all I thought was, “I am going to be old! All the good parts of my life will be over!”

In the 1970s, the book by George Orwell, 1984, was still about the future then, and we read it in school.  An image of large television screens everywhere, attached to the inside and outside of every building, comes to mind when I think about that book.  A man is watching everyone from the television screens, 24 hours a day.  His name is “Big Brother.”

“2001: A Space Odyssey” came out in the movies in 1968, but I wasn’t old enough to see it then.  I did see it a few years later and I wondered about the future of space travel.  “The Jetsons” was one of my favorite cartoons . . . I still would like a hovercraft.  I used to imagine, while sitting on the Belt Parkway on our way to Brooklyn, how cool it would be to have a hovercraft.  To be able to lift off the ground and pass all the cars stuck in traffic below.

In 1977, while in a Creative Writing class in college, I started my first novel.  It was a Science Fiction novel about a group of people living on a Space Station in the year 2011.  I never finished it, but since that is no longer the future, I suppose that ship has sailed.

In the 1980s, I became fascinated with Nostradamus and Revelations and the predictions for the new millenium.  The destruction of the old wicked world and the beginnings of the thousand years of peace.  The predictions were both terrifying and hopeful.  And then, in the 1990s, the Gulf War ensued and I thought the predictions were coming to pass.  But we survived.

When the year 2000 was finally approaching for real, I filled my bathtub . . . just in case.  “They” said all the computers might shut down and everything that we relied on would just stop.  I had two small children, so I wasn’t going to take any chances.  Luckily, much of the world entered the new millenium before New York did, so by the time midnight came, I figured we were pretty safe.

2015 will come tonight.  I never dreamt or thought about 2015 in my life.  It is beyond my imagination and yet it is about to be here.  We don’t have hovercrafts that we can ride to work in yet, “man” has not physically travelled beyond the moon, we have old space stations that are ready to be retired, and Big Brother is watching us, but not from large television screens, he’s watching us from our phones.

I wonder what years do my children dream of?  What do they imagine for their future?  I’ve learned two things for sure, their future will come sooner than they think and being in your forties, isn’t old. Here’s to the New Year!  Wishing for John Lennon’s Imagination of a world at peace to finally become a reality.  It is time for our thousand years of peace.   Have a Happy, Healthy and Safe New Year!