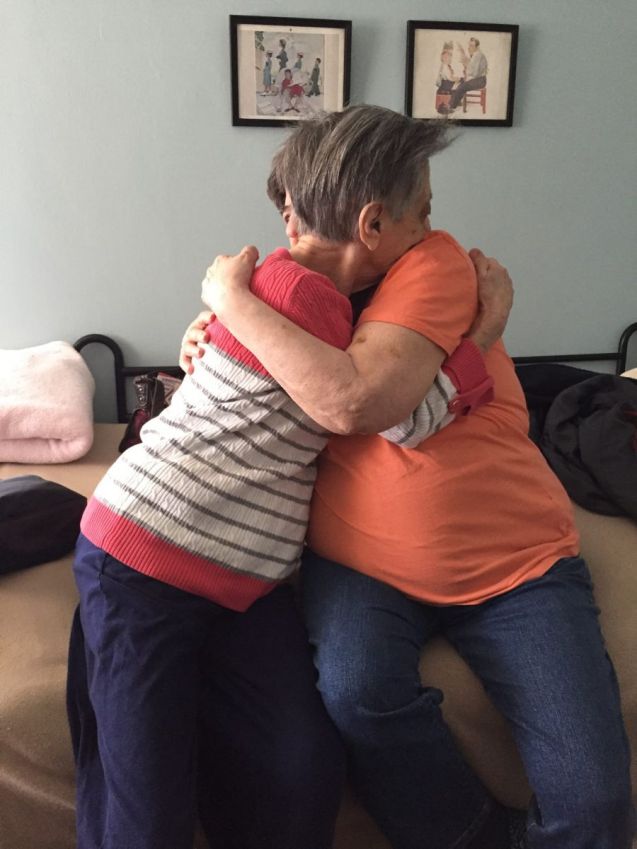 My mom was having a difficult time walking, her knees were just giving out under her, so I had to come up with a plan for our day out.  As we ate McDonald’s cheeseburgers in the car after going through the drive-through, I asked her what she wanted to do.  She said she didn’t care, anything that I wanted was fine.  I asked her if she wanted to go to the beach or maybe take a drive through our old neighborhood.  She said she didn’t care.  She gets depressed with the memory loss and the constant feeling of being confused.  We started driving down the highway and I considered my options, the assisted living home that she lives at could and probably does take her on trips to the beach, so I decided to take her to our old neighborhood.  I’ve done these trips with her before, but it’s been a while and her memory loss had progressed so I was anxious about what would happen.  At first, I was worried about her and how she would react. Would she remember it and would she be sadder knowing that this was in the past?  Then I realized it wasn’t her that I was worried about, it was me.  How was I going to handle her reaction?  What if she didn’t remember it at all and it only confirmed that all memories of my childhood, of our family, were gone from her now?  Tears came to my eyes as I drove.  My mother repeated her plea that she wished God would take her, she told me again that she doesn’t want to live like this.  I tried to console her.  I drove on, closer to the town I had been born in and grew up in.  Mom’s eyes closed and she fell asleep for a while. She opened her eyes and observed the traffic, “I’m glad I don’t drive anymore, I’d get lost.” she said.

We turned from the highway onto Grand Avenue, the main north/south road in my old town. She perked up.  “Is this the old neighborhood?” she asked.  I smiled and choked back the tears, “Yes, mom!  It’s the old neighborhood.”  “It looks different,” she commented.  “Yes mom, it’s changed.”  After moving out of Brooklyn with her young family including two adolescent boys and her little girl, she had moved to this neighborhood and lived here for fifty years.  She had two more children here, myself and my little brother.  She lost her husband here, she watched her children leave from here, and finally, she left herself.  She lived with my younger brother until a year and a half ago, then at the age of 91, she moved into the Memory Care Unit of an Assisted Living Home. We drove south, I pointed out some places she might remember. But she just said, “It looks so different” or “I don’t remember that.  Isn’t that funny?”

As we pulled up in front of our old house she asked, “Is this the house?”  She didn’t remember it.  I said, “It looks different mom, it used to be white, the steps are different too and the railing is gone.  She replied, “Hmm, it doesn’t look familiar.” We drove on, we passed her friends’ houses, we passed my old elementary school, we passed the junior high where she worked in the cafeteria after my father’s death.  Nothing looked familiar to her.

I asked her if she wanted to drive to her sister’s house.  She said, “I have a sister?”  So we drove there, picking up a crumb cake along the way.  We had a lovely visit.  There were times when mom knew who her younger sister was and there were times when she thought I was her younger sister.  But the more we talked, the more things came back to her.  I showed them old pictures I had on my phone and that helped bring back some old memories for them both. They were laughing and talking and hugging and enjoying each other’s company.  But my mother kept asking me if we left someone in the car.  I told her no one was in the car.  After hours at my aunt’s house, we finally left.

When we got in the car, mom said she hated leaving my little brother, Anthony, home alone. She said she hated that he was all by himself. I said, “Mom, he’s not by himself.  He’s married and he has a son.”  She ignored me. Instead, she focused on him being alone. She wanted to know, “Are the girls with him?”  I asked, “You mean Theresa and Rosemary (myself and my sister).” She said, “Yes.”  I said, “Mom, he’s at work.”  That satisfied her.  She was quiet for a bit longer than she said, “I don’t like visiting people I don’t know.”