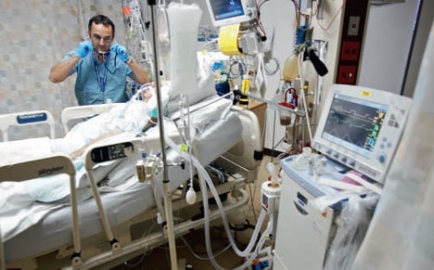 Continuous pain shot down through the nerve networks of my arms.  The only way to ease the pain was to keep them immobile.  So both of my arms spent as much time as possible in braces.  I cried when I realized I couldn’t braid my daughter’s hair because my hands were swollen to twice their normal size.  I remember getting my first assignment to cover a Board of Education meeting for the local newspaper.  I bought a special ergonomic pen to help me take notes, but still, I struggled through the meeting and collected the notes through the pain.  In the hallway outside the auditorium, I ran into an old friend.  I told her about the pain and swelling that I was experiencing.  She looked at my hands and said from her own experience, “It could be your lymph nodes.”  She had had cancer and experienced a similar side effect.  That touched off warning gongs (forget bells) in my head because my father had died of lymphosarcoma.

I made an appointment with my general practitioner for the following week.

A few days later, continuous pain shot down through the nerve networks of my legs.  My ankles became swollen and heavy.  It was painful to walk.  I finally went to my appointment with my doctor.  He looked at my hands and then looked up into space, he reached up in the air for a term and picked out, “Carpal Tunnel Syndrome.”  I said, “But my legs are swollen too.”  He ignored me and wrote down his diagnosis.

Weeks went by and no matter how many times I visited my doctor he would just look back on his chart and point out that I had “Carpal Tunnel Syndrome.”  After all, he wrote it down, it must be so.  Christmas came and I laid on the couch as my children opened their gifts.  Santa had been extra generous that year because, somehow, he and I thought this might be my last Christmas with them.  I couldn’t help them open their gifts or play with them.  I could only sit there and watch and smile while trying not to move.

My doctor had finally agreed to allow me to take more tests.  He had me call a neurologist to set up an appointment to be tested for Carpal Tunnel Syndrome.  But it was the holidays and everyone was busy so I couldn’t get an appointment until January.  I began to realize that I now knew how it felt to be old.  To live with pain and discomfort every moment of the day and night. To be limited in my mobility by the pain that every movement caused.

Three weeks later, before I had a chance to see other doctors, my son came home from school with a sore throat and fever.  The next day, I began to have pains in my stomach.  The following day, my son was put on antibiotics for strep. Another day later, I had a body temperature of 93.4.  My husband brought me back to my doctor’s office and I saw another doctor on the staff.  He thought I might have appendicitis and that my body might be going into shock, he instructed my husband to take me to the hospital.

What I ended up having was Streptococcus Type A Toxic Shock Syndrome (i.e. Septic Shock) caused by regular strep that had invaded my blood system.  I believe that the pain I was experiencing in the months leading up to this, was some type of viral or bacterial infection that went undiagnosed and untreated.  That infection must have compromised my immune system and the strep was able to take over because the primary infection was never treated.  I can’t prove this, but it is what I firmly believe.

In the hospital I was in congestive heart failure, respiratory arrest, and renal failure.  I was operated on and infection was found throughout my body and surrounding every organ.  They took out my appendix, just in case it was the culprit but it was infected from outside in, not inside out.  It was a few days before they knew it was strep but they had already put me into an induced coma and on a respirator and were pumping me with major antibiotics.  I spent a week in the coma and on life support.

When I was taken out of the coma and off of the respirator, I was disoriented.  I will tell you about my spiritual experience during this time in another post.  I will only say that I am no longer afraid of dying.  But the real miracle was that my arms and legs no longer hurt. Whatever had caused the pain I had been experiencing had either worked itself out on it’s own during this time or had been cured by the mega-antibiotics that had also saved me from the strep.  One day in the I.C.U. I was walking with a physical therapist past the nurses desk. All the nurses were staring at me.  I asked, “What is it?”  One of them said, “You don’t understand, we don’t see people who come in as sick as you were get up and walk past us a week later.”  I spent another week or so between the I.C.U. and the cardiac floor before being released.

I never once saw my original doctor during this time, although my husband said that a young doctor who seemed barely out of medical school had visited me in his stead.  A few days after getting home, I received a phone call from my doctor’s office. They asked if I had kept the appointment with the neurologist who was supposed to test me for Carpal Tunnel Syndrome.  I had a hard time finding my voice but finally I said, “Does he know that I was in the hospital? Does he know that I almost died? No I didn’t keep the appointment.  I was in a coma in the I.C.U.”  She said, “Oh, I’m sorry” and hung up.

I’ve never gone back to that doctor again although he still has a local practice in my neighborhood.  Instead, the Internist who saved my life in the hospital, has become my doctor. He was very proud of me, by the way, and he even presented me to a group of doctors at a conference.  He told me I was “a save.”  I told him, so is he.

(Read “Comas Come with Gifts” for the sequel to this blog post.)

(P.S. When I awoke from the coma, I asked my sister to get me a notebook and pencil.  I wrote down what I remembered, I still haven’t been able to read what I wrote, but I have it in case I ever feel strong enough to do so.  But I do know one thing I wrote, it was that I needed to live to raise my children and to write my book. This is the first year that both have been accomplished! My children are raised and The Tin Box Secret is not only written, it’s been published, and the sequel will be published this summer! 2016)