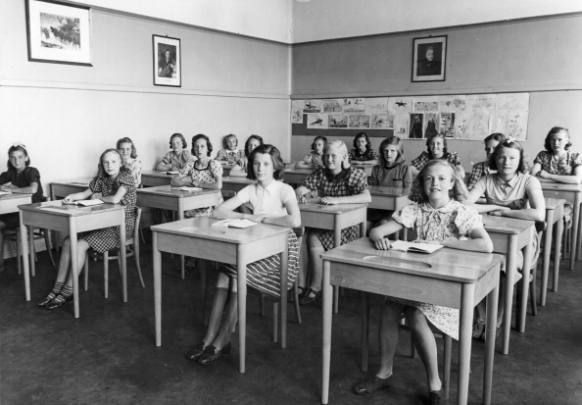 My grandmother was born in Italy in 1892 and came to America in 1901 at the age of eight. Her situation as the oldest child in the family did not allow her to be a child for long. Educating a girl back then was thought to be a waste of time and effort.  Girls like my grandmother went to work in sweatshop factories to help provide for their families.  At sixteen she was married, at seventeen she was a mother, at eighteen after the death of her father, in addition to her own children, she and her husband became responsible for her mother and younger siblings.  There was no time for education in that era.

My mother was born in 1922 in Brooklyn, New York.  She did graduate from high school, but the high school she attended taught girls skills that were useful to them.  She learned how to cook and sew in school. She worked for a brief time in a sewing factory and then she married and for the next two decades produced children while she cooked and sewed.  The thriving post-war economy in New York led to families moving farther from the cities and created the “suburb” where children went to school, fathers worked, and mothers stayed at home.

I was born in 1958 in a suburb of New York City and was the fourth out of five children.  Not unlike my great-grandfather and grandfather, my father thought education was a waste for girls.  In spite of that, my sister did attend junior college and became a nurse, but she paid for her own college.  I followed her and also chose to attend junior college and became a secretary while working part time jobs. Both were very acceptable and practical careers for women in the 1970’s. Later, while working full-time, we each continued our college education and received Bachelor’s Degrees.   Our ability to attend college was due to the acceptance of women in the workforce that came out of necessity during World War II.  For the first time, women were able to work and pay for their own education and through this, thoughts on educating women started to change.

We had the choice to go to college even if it meant having to work and pay for it ourselves.  I remember being in college and enjoying classes in Anthropology, Archaeology, Psychology, Astronomy, Sociology, Philosophy, and Literature.  But since my college career lasted twelve years in order to receive a four year degree, as the years passed, dreams of pursing careers in these fields had to take a backseat to making money in order to be able to afford to own a home and raise a family of my own.  In the 1980’s the economy took a nose dive and the cost of homes and the American Dream increased tremendously while salaries lagged far behind.  Yet our generation was determined to give our children, even our girls, the education and choices that we didn’t have.

My daughter was born in 1991 (almost exactly one hundred years after my grandmother’s birth) and is now pursuing her Ph.D. in Environmental Anthropology at a well respected university.  She travels to distant and remote places to study indigenous people and their cultures.  She is in essence living my dream and I am so proud and excited for her and her future.  I only hope that young women today take a look at how far women and education have come in this last century and encourage them to understand and appreciate the choices that they enjoy today.