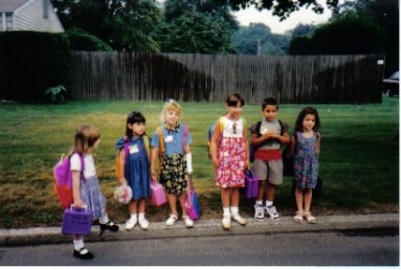 From the moment we are born, we are weighed, measured, and evaluated on a scale of numbers.  Every month, parents take their infants to see a doctor for the first year of their lives and at every visit their baby is again weighed and measured and parents are told where their child falls among the “average.”  I remember bringing my children to these visits and hoping that they would at least be on the scale, because sometimes they weren’t.  Beyond the doctor’s office, we parents compare our children to other children.  Is my child rolling over before others?  Walking before others?  Talking before others? Comparisons don’t stop there, we send them to school and have them graded on their intelligence, their maturity, and their ability to interact with others.  Parents get called into Parent/Teacher conferences and are told how their children measure up.

For me, I wanted my children to be children for as long as they could be.  I wanted them to feel free to develop their imaginations and encouraged them to find ways to learn that were “outside of the box.”  There was nothing that made me prouder than when they took toys that didn’t belong together and found ways of enhancing both toys by combining how they chose to play with them.  I wanted my children to want to learn, to have fun while they were learning, to seek and explore and to develop their senses and their abilities.  Yet I remember one devastating parent/teacher conference when my son was in first grade.  The teacher told me that she had moved his seat and put him next to her desk because he wasn’t focusing. “Focusing” was a word that I heard a lot from the teachers of both of my children, they both seemed to have a deficiency there.  I came to hate that word.  Anyway, when I took my little boy home and talked to him about why his seat had been changed, he reached up his little fist and hit his own head, he looked at me with tears in his eyes and said, “Mommy, why can’t I get my brain to work right?”  My children did not get distracted by what was around them, they got distracted by the imagination in their minds.  That teacher did more damage to my child than anything or anyone else he ever encountered. How many times does a child have to be told that he or she is valued to make up for even just one time when they are told, “You don’t measure up”?

Whether if our children compete in sports or quiz bowls, they are being compared.  They start to measure themselves against others.  Right up to the time they graduate high school and they have been compared by class rank, SAT scores, ACT scores, GPAs, how much volunteer work they did, how many jobs they held, how many activities they belonged to, and how many leadership positions they held?  We live in a world where these criteria matter.  The comparisons never stop and someone is always better than you and someone always has to be at the bottom of that scale.

The majority of us go through the rest of our lives trying to measure ourselves against our peers.  Is it any wonder that most of us end up feeling that no matter what successes we have achieved in the past, we are still just not good enough?  We may not let the world know this, but isn’t it the tape that is playing in our heads over and over again every time we fail?  Every time we let ourselves down or don’t meet with the approval of others, we silently say to ourselves, “What is wrong with me?”  Why can’t I do this?  Why aren’t I good enough?”

Self-esteem comes from within, it comes from recognizing that you are doing your best and that you did everything that you could.  It comes from not having regrets for not trying.  When your child succeeds at something, don’t just tell them, “I’m proud of you.”  Tell them, “You should be proud of yourself.”  When they fail, ask them if they did their best.  If they can answer that they did, then they should still be proud of themselves for trying. Teach them to forgive themselves and pick themselves up again.   Show them this by example.  Tell them there is no shame in trying something else next time or in figuring out a way to do it differently.  Teach them to think for themselves . . . think outside of the box.  There is always more than one way to get something done.

A person is more than what can be measured.  Passion for something or an interest in something can enhance a person’s abilities and prospects.  Raising children who are well-rounded, giving them the chance to find where they belong, helping them to develop who their true-selves are, that is the job of a parent.  Teach them that they don’t have to do everything perfectly and they don’t have to have every minute of their day planned out.  Teach them to manage their time so that they don’t become overwhelmed.  But most of all teach them to compete only with themselves.