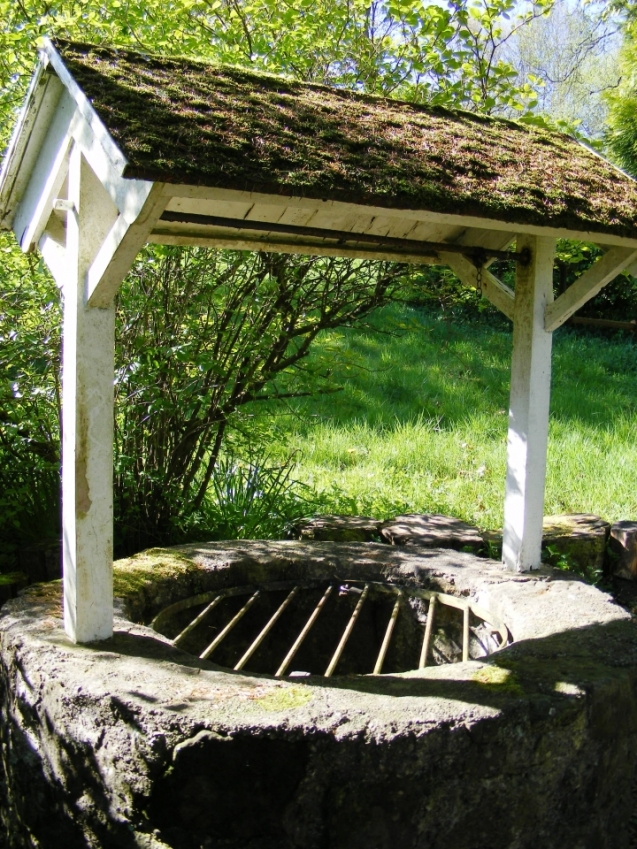 When I was a little girl, my friend had a wishing well on her front lawn.  Once in a while, I would drop a penny into it and make a wish.  We all  made wishes, but I don’t remember anyone else’s wish.  My wish was always the same.  Now I could have wished for world peace or a million dollars, but instead, I asked for the one thing I had always wanted, an Easy Bake Oven.  This was no secret, everyone knew I wanted an Easy Bake Oven, but each birthday and Christmas would pass and no Easy Bake Oven.  One Christmas, I got the packet of mixes for the Easy Bake Oven, but my mom and I made the little cakes and cookies in her oven.

In general, we didn’t get a lot of toys when I was a kid.  I can remember one birthday when I went shopping with my Dad to a toy store so that I could pick out a gift.  He picked up a game called, Eye Guess, and told me that it was a good present.  I noticed that it cost $3 and that told me why he thought it was a good present.  Now at the time, I didn’t appreciate that things cost money, I just wanted what I wanted.  It wasn’t until many years later that I realized that my father, who was a child of the Depression Era, gave us what he always wanted as a child, a stable home.   I believe he moved nine times before finally, as an adult, he was able to help his parents buy a house.  As a boy, he had to sing on the corner or shine shoes to make money to help buy food for his younger siblings.  So as a father, his gift to us was a home, food on the table, and clothes on our backs.  But as a child, I wanted toys and parties like the other kids had.

So when I became a mother of a little girl, my weak spot (or as my kids would tell you, my “pothole”) was toys and parties.  It was what I didn’t have as a child, so I wanted to give them what I didn’t have.  Even though the box said that it was for ages 8 and up, my daughter got an Easy Bake Oven when she was five. When my little girl was born, I decided to stay home and raise her which meant less money coming into the house.  I didn’t mind not having things that I wanted as long as I could give her toys.  As she grew, our basement became divided into play centers.  An area for improving small motor skills, an area for improving large motor skills, an area for imaginative play, and an area for creative play.

Her little brother came along when she was five and he was born into a world of toys.  Before he could even read or write, he knew how to put stickers on images of toys in toy catalogs in order to make his Christmas list.  I remember how I would try so hard to get them what they wanted and would start shopping in September.  Long before the stores ran out of the popular toys, they were safely in a hiding place in our house.  But then the toy industry would come up with new must-have toys in November, and I would have to go scrambling again.  I didn’t mind, really, as long as they were happy.

One year I went shopping early and bought my daughter this baby doll that she wanted that could eat food and wet her diaper called Baby Born.  She really wanted this doll, but it was expensive and now I had two children to buy toys for and I still wasn’t working.  But when the toy catalog came out the weekend after Thanksgiving, she put My Size Barbie on her list.  She had added a little note for Santa Claus, saying something to the effect that this was the last time she was going to ask for My Size Barbie since she had asked for it for several years already.  My Size Barbie was even more expensive than Baby Born.  I spoke to my sister on the phone and told her about my predicament.  I was hesitant to buy the Barbie because my daughter was getting a little old for it and soon would be taller than My Size Barbie.  But my sister said, “You don’t want it to become her Easy Bake Oven.”  So I went out and bought My Size Barbie too.

One year my son’s list was so long that there was no way he could be happy with what was going to be under the tree.  There was a holiday cartoon on called “Jeremiah Creek” in which a little boy sent a long list to Santa.  When Santa received the long list he said, “This can’t be for just one boy!”  So Santa looked on his map and found a lost town named Jeremiah Creek and thought the list must be for the children of that town.  On Christmas morning, little Jeremiah Creek woke up to no toys under his Christmas tree.  But the television set was on and the news anchor was in the town, Jeremiah Creek, reporting on all the happy children who had received Christmas presents for the first time.  Little Jeremiah realized that they were his toys, but when he saw the happy children, he also realized he had been asking for too much and was happy that the toys had found homes with children who appreciated them.  So I sat down and watched this show with my son and told him that there was a new rule in the house.  The children could only ask for the amount of toys equal to the number of years they had lived up until they were ten.  Once they were ten, that was the maximum amount of toys that could be on their list.  This worked and it gave me a chance to also buy toys that weren’t on their list but that I thought they would enjoy.

Now I want to go on record as saying that my children have grown to become the most loving, caring, interesting, and thoughtful people I know.  However, somehow I have harmed them by giving them so much. I seem to have robbed them of the chance to have something to commiserate with when they talk to other young adults who didn’t have as charmed of a childhood.  Imagine my surprise when I went to take my daughter home after her first year of college and found that she had received Legos from her friends as a birthday present because she had told them that (the poor thing) she had never had Legos of her own as a child.  I looked at her and said, “Then who had those pink and lime green Legos that were for building a house with a little Lego family?  They didn’t belong to your brother.”  She hesitated a moment.  I think she did remember them but she wasn’t going to let her college friends know that.  Instead she said, “No I didn’t have any Legos.”  So in spite of my efforts, it seems I gave them too much.  The lesson learned is that no matter what you give your children, they still want to complain about you so that they can feel “normal.”  But she did have Legos . . . and Baby Born . . . and My Size Barbie . . . and an Easy Bake Oven.