As we enter the year 2015, I thought you would all enjoy a story about my grandmother, Vincenza Noto, and her family.  She arrived in America on October 24, 1901.  I continue to research their lives, but based on what I know so far, this is how I envision that it happened. 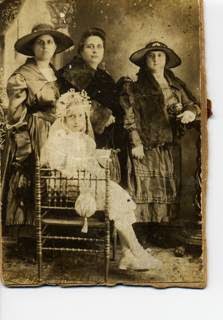 The hall of the tenement house smelled of the cooking that took place behind the many closed doors.  On each floor, there was a bathroom that was shared by four families.  This was an improvement from the outhouses that had once stood in the courtyard.  Recently, windows had been installed above the doors to the individual apartments.  Although they could be opened to help the stale air circulate, the halls remained dark and gloomy.

“Nana!” Grandma Rosalia Sconzo watched as her granddaughters ran up the tenement’s stairs toward her.  She smiled at their excitement and wondered what life would bring to them in America.  Eight-year-old Vincenza (my grandmother) and her five-year-old sister, Rosie, raced up to greet her after their long journey.  Vincenza was pushed aside by Little Rosie, as the younger girl scrambled past her to reach the landing.  Little Rosie pulled on her grandmother’s heavy black skirts, “Nana, I won!”  At 69 years old, Grandma Rosalia was starting a new life in a new world.  She had had serious reservations about this decision, but once her children had decided to give it a try, she became determined to accompany them.  Rosalia Lubrano Sconzo was a widow who had four sons and a daughter.  Giuseppe, the oldest, was 47, then came Antonino (Alphonse), who was 43, then Vincenzo, who was 41, then her only daughter, Marianna, who was 31, and finally, the baby, Andrew, who was 26.  With the arrival of Marianna and Andrew, now all of her children were in America, except for Vincenzo.  She looked past her granddaughters and saw as her daughter, Marianna, struggling on the narrow dark stairs, holding baby Thomas in one arm, while two-year-old Francesco held onto her free hand.  Grandma Rosalia’s daughter-in-law, Angelina, Andrew’s wife, trailed behind Marianna, carrying her own infant son, also named Thomas.  Both boys were named after Rosalia’s husband, Gaetano (Italian for Thomas).  Grandma Rosalia coaxed Vincenza in her thick Sicilian dialect, “Vincenza, go help your mama.” Vincenza dutifully turned back toward her mother and little brothers and grabbed hold of Francesco’s hand so that Marianna could hold on to the wooden banister as she continued to climb.

Only five days earlier, on October 19, 1901, Grandma Rosalia had looked back at the S.S. Patria and its three huge smoke stacks as she left Ellis Island.  She had never imagined that she would travel across the Atlantic Ocean to America, yet here she was.  She had accompanied her son, Antonino (Alphonse) Sconzo, along with his wife, Josefina, and their two young sons.  But her eldest son, Giuseppe Sconzo, along with Marianna’s husband, Antonino Noto, who was 34, and Antonino’s brother, Agostino Noto, who was 26, had already been traveling back and forth between Italy and New York since 1897.  Earlier in 1877, Giuseppe had married, Francesca Noto, the sister of Antonino and Agostino.  Later, in 1891, Giuseppe’s sister, Marianna, had married his brother-in-law, Antonino Noto.  Giuseppe, Antonino, and Agostino, had all paved the way for the rest of the family to join them on Columbia Street in the Red Hook section of Brooklyn.

Giuseppe and his wife, Francesca, lived in a tiny three-room tenement apartment with their eight children who ranged in age from two to nineteen.  In the same building, Francesca’s younger brothers, Agostino and Antonino, shared another tiny apartment.  But now, with the latest arrivals, they would be sharing that apartment with Antonino’s family and Andrew’s (Andrea in Italian) family.  The dirt streets outside were crowded with wagons selling their wares.  People walked everywhere, the women in their heavy clothes, the men in their shirtsleeves.

A month later, Vincenza sat by the window in her tenement apartment.  She reached into the close-pin bag, grabbed a handful of close-pins, and laid them on the floor.  She took pieces of cloth and sewed “doll clothes” and wrapped the tiny outfits around the clothes-pins.  In this way, she made dolls for herself and Rosie to play with. They sat on the floor and listened as the family prepared dinner.  Vincenza thought that although they had traveled thousands of miles, this apartment in New York was not much different from their apartment in Palermo.  Both were tiny and crowded with people.  Both were dark and grimy in spite of all the cleaning that her mother, aunts, and grandmother did.  She wondered why they had traveled so far for the same thing.  New York was not what she had imagined.  She thought it would be all bright and glistening, shiny and beautiful.  Her father, Antonino, had left a good job in Sicily as a Blacksmith, to become a Longshoreman in New York.  Every morning he left early to walk to work with her uncles.  They worked long hours and when the men came home, they were tired and smelled of dead fish and sweat.  They would smoke their pipes and cigars and drink their strong coffee as the women served them.  But today was Sunday.  Her father sat in his chair and read his Italian newspaper.  He seemed happy to have his family all together again.

Three years ago he had left his family to give America a try. A short time later, his brother, Agostino, joined him.  A year after that, his sister, Francesca with his brother-in-law, Giuseppe Sconzo, arrived with their children.  Antonino had then traveled back to Sicily and prepared his family to return with him to New York.  Now, all the planning and preparation was done, and his dream had finally become a reality.  He had every reason to believe that with hard work, his decision to bring his family to America would be a blessing for his children and grandchildren.

Meanwhile, a few months later, on January 15, 1902, Gaetano Zimmardi (my grandfather) arrived on a ship called the Esperia.  He was working on the ship in the boiler room.  The ship had left Palermo just after Christmas, on December 27, 1901.  Gaetano left his father, Santo, his step-mother, Maria, his sisters, Grazia and Rosalia,  a younger half-sister, Vincenza, and a younger half-brother, Giuseppe, behind in Sicily.  As far as I know, he never saw any of them again.  In Sicily he had been called “maestro”, because he was a music teacher who played the mandolin beautifully.  But on the journey to America, instead of strumming the delicate strings of his instrument, his hands became black as he labored in the belly of the ship, shoveling coal into the furnace that propelled the ship forward. In the nearly three weeks that it took to traverse the Atlantic Ocean, Gaetano had devised a plan.  When it landed in New York harbor, he disappeared into the streets of New York.  Having arrived illegally, those first years must have been difficult.  He probably found family in America to help him.  I am still researching this missing piece of the puzzle.  A week after arrive, he turned twenty-three years old.

Marianna gave birth to another son, Paolino, in March of 1903, but the baby passed away in July from chronic gastro-intestinal disease.  Possibly caused by unpasteurized milk that was delivered by horse and wagon along the crowded tenement-lined streets of the city.  Grandma Rosalia Lubrano Sconzo passed away on September 14, 1906 of a heart attack.  She died a year before her son, Vincenzo arrived in New York with his wife and seven children on December 21, 1907.  Vincenzo’s wife and two of his daughters were ordered to return to Italy from Ellis Island.  It was a few more years before his family was reunited in New York, completing the immigration of Grandma Rosalia’s family to America.  Rosalia Lubrano Sconzo was buried in Calvary Cemetery on September 16, 1906.  On June 15, 1907, Marianna Sconzo Noto gave birth to her last child, Salvatore.  Sadly, less then a year later, on February 18, 1908, her son Francesco died of Tuberculosis at the age of nine.

On February 21, 1909, at the age of 30, Gaetano Zimmardi married sixteen-year-old Vincenza Noto.  Gaetano Zimmardi made his living as a machinist according to the 1910 census.  Vincenza’s family must have accepted Gaetano as a son-in-law rather quickly, because they all lived together on DeGraw Street in 1910.  Giuseppe Sconzo lived on Union Street by 1910.

But as the years passed, it seems that Antonino Noto’s life did not exactly go as he had planned.  The struggles he faced in America were ones he could not have imagined.  His work as a longshoreman on the docks of Brooklyn harbor, brought him under the control of The Black Hand.   The Black Hand was a predecessor to the MAFIA. They were not well organized, they were more like small bands of thugs, but they ruled the streets and the docks of New York in the early years of the 20th century.  If you did not follow their commands, you had to pay.  Sometimes, they would take your children or your wife as ransom.  On the morning of December 29th, 1912, Vincenza’s father, Antonino, was found dead of self-induced biocloride of mercury poisoning.  His suicide ended the threat that the Black Hand held over his family.  But his death left his wife, Marianna, with three young sons, ranging in age from two to fourteen, and two daughters, Little Rosie, who was now sixteen, and Vincenza, who was now eighteen with two babies of her own.  For the rest of her life, Marianna lived in the same house or close by to her daughter, Vincenza.  Marianna died in 1941 at the age of 71.

Upon the suicide of his father-in-law, Gaetano had become the soul support for his wife’s family, along with his own growing family.  In the 1920 census, the first census where my father, Tony, appears, Gaetano is listed as a Boiler Maker. In the 1930 census, he is listed as a laborer working on the docks.  In the 1940 census he and Vincenza had nine living children and he is listed as a Boiler Maker for “Dry-Dock Steamship.” However I have been told that he also worked as a tailor for many years, I haven’t found any documentation to prove this.  Only at home, did his now blackened fingers play his mandolin as he remembered his old life in Sicily.

Vincenza and Gaetano grew old surrounded by their children and grandchildren.  They survived the Great Depression and with the help of their son, Tony, in 1938 they were finally able to buy their own house in Brooklyn on 56th Street.  The family gathered there every Sunday until Gaetano and Vincenza moved out to Long Island around 1967.  Vincenza had diabetes and she developed gangrene from an injury to her toe and, eventually, had to have both legs removed.  She died in 1969 at the age of 76.  Gaetano became senile in his old age, he passed away in 1971 at the age of 91.

So, take a moment this New Year’s Eve to think about all that your ancestors survived.  Through their struggles, their greatest hope was for their descendants to have a better life.  Probably not so different from your own greatest hope.

http://www.theresadodaro.com   Author of The Tin Box Secret and The Porcelain Doll