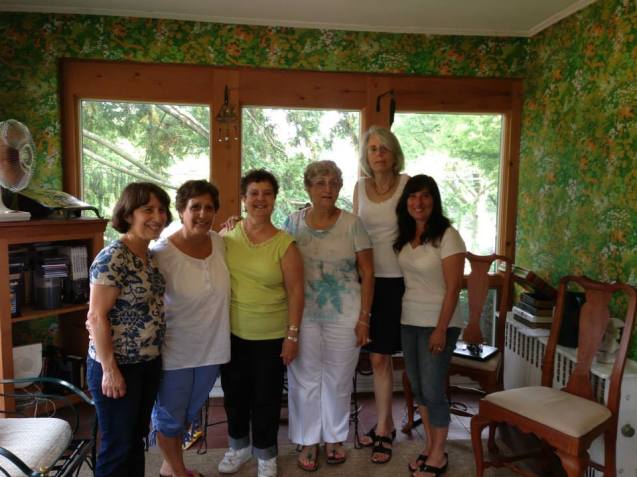 Yesterday, I was working from a film of death indexes and I found the deaths of some of my oldest ancestors.  This alone is a great “find” but when you combine it with not only their death dates, but their ages, and the names of their parents, it is like opening a brand new book; you now want to read it and know all about the new characters.  After adding one into my ancestry tree, I clicked the tab that says “View Relationship to Me” and there it popped up, “Your 5th Great Grandmother.”  I looked at the unfamiliar name, not even quite sure how to pronounce it, and said, “Hello, there, great grandmother!  I’m sorry I didn’t know who you were, but now I have found you.”  Francesca Paola Carciola was married to Giovanni Riso and was the mother of Rosaria Riso.  Rosaria had died on the 9th of May 1856, at the age of 72, in a part of Palermo then known as Molo.  This meant Rosaria’s birth occurred around 1784 and that her parents’ births occurred around 1760.  Francesca was the great great grandmother of Antonino Noto, my great grandfather.

(See the photo above, Antonino is the older of the two boys, the younger one is his brother, Agostino, and here following this, is a photo of the descendants of the two brothers at a recent “reunion” of the family. One of these women and I were both piecing our trees together individually, when we found each other and were able to connect that we were descended from the same couple in our ancestry, the parents of these two little boys: Rosaria Riso’ granddaughter, Vincenza di Pace, and Vincenza’s husband, Francesco Noto.)

Sometimes my long dead ancestors come to visit me in my dreams at night.  They help me put together connections and I picture the names in the trees and where and how they fit together.  I can “see” them as people and imagine their lives based off of what I have learned about them and what I have learned about where and when they lived in history.  But one of my ancestors is a mystery.

Her name was Rosalia Esposita and although I know that she married my 2nd great grandfather, Giuseppe Triscritti, on the 11th of October in 1855 in a part of Palermo then known as Santa Agata, my knowledge of her and her family ends there. Esposita or Esposito means “orphan.”  This could mean that she was either an orphan herself or the descendant of a male orphan.  In her marriage index there are no parents listed.  In place of a father’s name it simply says “Esposita” and no mother’s name is given.  I know that she had one daughter, Maria, in 1856 and that she must have died by 1875 because her husband, Giuseppe, remarried in that year.  But that is all that I know about her.  In my sleep last night, I started thinking about her and wondering . . . what could have happened to her parents for her to be an orphan without a name?  There had to be a known mother somewhere who gave birth to her, even if she had died in childbirth.  That woman, whomever she was, was my 3rd great grandmother.  What happened to her?  A thought struck me and it was so forceful that I had to get out of bed in the middle of the night to check my family tree and find out where Rosalia fit into chronological history.  I had a hunch and I had to see if it was a possibility.  It was a hunch that would explain why she had no known parents if it proved to be true.

Upon further inspection, at three o’clock in the morning, I again pieced together what I knew about her.  If Rosalia married in 1855 and had her first child in 1856, she was probably around twenty in 1855.  That would put her birth at around 1835 . . . in 1837 there was that Cholera pandemic.  If She was eighteen at her marriage and nineteen when she had Maria, then she may have been born to Cholera victims.  It would have been at a time when entire families were dying and being wiped out. Perhaps she had no family to care for her.  Perhaps someone brought her to a convent or an orphanage and, not knowing who her parents were, the institution gave her the name Rosalia Esposita?  I have some more research to do now.  I will try to find her in the death records between 1856 and 1875, if I find a Rosalia who is about the right age, I may find the year of her birth.  I also need to order the film of her marriage now.  Perhaps there is some lost information on the extract from her birth record (which should be attached to her marriage record) that might help shed some more light?  I will do my best to find out, there’s nothing I like better than a good mystery!

Father Name:Esposita
Some genealogists hoard their “finds” and don’t share them.  They feel that they have gone through the time and the expense of researching and finding their ancestors and they don’t want to share the information with other family members who would then be essentially, getting it for “free.”  But I don’t feel it is mine alone to keep, it is ours.  Without it being passed on, what use is it?  Isn’t the point of the research so that these ancestors of ours can live on in time? Isn’t the point of the research so that our descendants will know who they were . . . who we were?  For me, it is in the sharing that comes the most satisfaction and joy. Pass it on and reunite with your long lost family.  You can never have too many cousins!