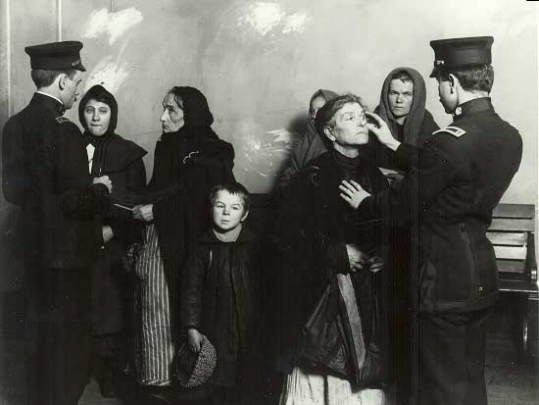 (This story is what I have imagined but is based on a true story I uncovered while researching my husband’s family tree.)

A young boy stood by and watched as his mother, sisters, and brothers laid flowers on his father’s coffin.  Next to the open grave were three tiny headstones, one for Vincent, one for Linda, and one for the first Evelyn, his brother and sisters who died as small children.  One by one, each of them cautiously approached the hole that the coffin hovered over.  He held the hand of his youngest sister, Evelyn.  She still had not shed a tear and he worried that at the age of four she did not understand that their father was gone forever.  Evelyn looked up at her brother and said, “Can I keep my flower?”  He looked around at the others, not sure if this was a question he could answer on his own, after all, he was only eight years old.  “Please, Alley, I want to keep it to help me remember him.  Besides, the flower will just die if I leave it here.  If I keep it, I can dry it properly and keep it always.”  The boy smiled at his little sister and said, “Here, you and I will share my flower and leave it on the grave and then you can take yours with you.”  He took her flower and hid it inside a pocket on her little apron.  After the others had started to walk away from the grave-site, Alley and Evelyn approached the coffin.  He held her hand firmly, afraid she might fall through the gap that surrounded the coffin.  Together, they placed the fragile flower on their father’s coffin.  Together they said goodbye to their father, knowing that they were about to embark on a long journey that would take them far away from this place that had always been their home.  They would never see his grave again.  They walked away and followed the others in the procession through the village.

The following day, their father’s mother stuffed blankets full of cheese and bread into their hands as their father’s father hauled a box full of wine into the wagon.  Kisses and tears flooded over the children as they stood together excited about the journey ahead of them.  Goodbyes aren’t something that children really understand.  To them there is always time for reunions so they were not as worried as the adults.  They were going to America, after all!  They knew that they would become rich and be able to travel back over the sea to visit their homeland whenever they wanted.  Besides, at the other end of their journey, their mother’s parents were waiting for them in a place called New York.

They waved goodbye to their grandfather from the bow of the big ship.  Steam blew through the smoke stacks clouding the cold blue sky above with a black haze.  The shadows of the towering stacks blocked the meager afternoon sun and caused Alley to shiver.  As the shore disappeared from view, the children followed their mother, Maria, down to the bowels of the ship where steerage passengers huddled together.  Their mother had already prepared a place for the children.  They had to share cots since there weren’t enough for all of the passengers.  Still the children looked on the journey as an adventure.

At first the days were passed with enthusiasm.  The families around them joined together to play the music of their country.  They danced to the Tarantella and clapped their hands.  Their feet moving in the familiar patterns.  But it wasn’t long before some of the passengers became sick.  As the coughs increased, the sense of community decreased.  People retreated to their cots, afraid of being too close to their neighbors.  They huddled instead around their hard bread and wine.  More days passed and the bread grew moldy, but they ate it anyway.  The seas grew rough at times and tossed the occupants and their cots across the wooden floor.  Maria prayed to the Virgin Mother to protect her children, all seven of them, so that they might reach the shores of America safely.

Word spread quickly when land finally came into sight.  The children rejoiced and laughed as they raced between the cots and the scolding words of the adults.  Two boys were fighting over an orange that one had saved under his pillow.  One of the boys ran right into Alley’s seven year old sister, Pia. She screamed as the orange split in half and squirted its juice into her face.  “My eyes!  They sting!” she cried.  “Shhhush!”  Her mother picked up her skirt to wipe the child’s eyes.  “It is fine, you will be all right!  We must get ready to leave the ship.  Here, take your clothes and wrap them in your blanket.”   She set the girl to work and soon the family was walking off the plank and onto the frozen dock.  It was Christmas Eve, 1909.

Ellis Island loomed in front of them.  Stories of people who had been turned back at this point filled their heads.   Maria clucked as her little chicks followed her in line.  The smallest of them in front, the tallest followed behind the others.  Maria held the hands of the two smallest children, Emilio and Evelyn. Behind them came Pia, Alphonse, Enrico, and Sebastian. The last, the oldest, Angela, counted and recounted the heads in front of her to make sure they were all still there.  Languages swirled around them, mixing together into a chorus of confusion.  The adults could barely breathe for fear that a cough might escape their lips and the gates to America would be closed to them.  The children were tired. They had made the long journey to America and now they had to stand in a line for hours.  They were hungry and thirsty.  Their little feet dragged under the weight of their baggage.  But they remained quiet, they all knew what was at stake.

Maria saw the doctor first.  Then one by one, her children were ushered into the room with pointed instruments that turned up their eyelids.  The doctor shook his head when he saw Pia’s irritated eyes. In a language that Maria didn’t know, the doctor tried to explain that her daughter could not leave Ellis Island until she was examined further.  Then he said a word she knew, “Conjunctivitis.”  Now she understood and tried to explain in vain that her daughter had just had an orange squirted in her eyes. The doctor shook his head and separated Pia and Maria from the other children.  Maria shouted over the heads of the other children to fourteen year old Angela.  “Take the children with you, Nana and Papa will be waiting for you. We will join you when they see that Pia is fine.”

It was ten days before Maria and Pia were released.  Maria’s father, Fioravanti, came to gather his daughter and grandchild.  He stood very still as Maria rushed to embrace him.  Stepping back she reached for her daughter, “Pia, this is your grandfather, come, give Papa a kiss,” she instructed.   Pia shyly approached her grandfather and looked up into his hard-worn face.  He bent down low to receive her kiss but instead of standing again, he held onto the child as if he needed her young strength to live. He buried his face against her heart and began to cry.  Maria became alarmed and pulled at her father’s arm.  “Papa, what is it?  Is it Mama?”  Fioravanti shook his head.  He lifted the child in his arms as he pulled himself up to his full height.  “Cara Mia, I am so sorry.  Evelyn . . .” his voice broke up.  Maria felt a roar in her ears and the room began to spin.  In the distance she could hear Pia crying.  Fioravanti had put the little girl down and was now embracing Maria, suffocating her between his broad shoulders.  Her hands came up as she placed her arms between them, pushing him away, she began to beat her fists on his chest.  “No! No!” she cried.  But in spite of her denial, she heard his words above the roar that filled her ears.  “It was pneumonia, there was nothing to be done.  She has been buried in Potter’s Field. I am sorry, Maria, but there is no money for a burial plot.  We had no choice.  It is over, Maria, it is over,” he cried.

Spring came.  Maria and her son, Alley, stood over a small grave with a number for a marker.  In her hands, Maria held her daughter’s apron.  She knelt down and touched the wet dirt as a sob escaped her lips.  “My daughter, my beautiful daughter,” she repeated in her despair.  She brought the apron to her face and breathed in deeply, trying to absorb the smell of her daughter that still lingered in the fabric.  A rustling reached her ear as she pressed the material to her face.  Slowly she lowered the apron toward the grave, but as she did so something fell from the pocket.  It was a flower.  A dried flower from her husband’s funeral fell onto her little girl’s grave.