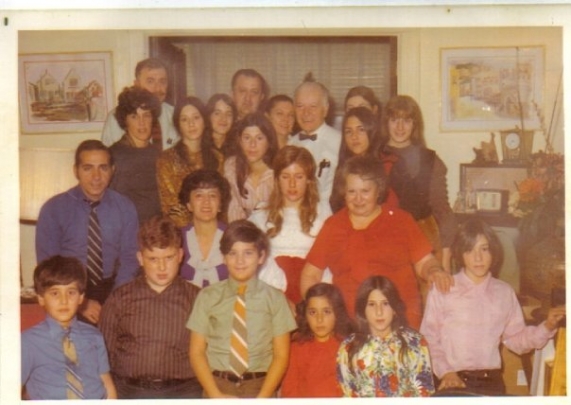 School was surprisingly easy for Alley in America in spite of lessons being taught in English and most of his classmates being German immigrants.   Ten year old Alley and his brother, twelve year old Enrico, whom everyone called Henry, were both tall handsome boys.  The brothers walked home from school as eight year old Pia and six year old Emilio followed behind.  The two oldest siblings, Angelina, who was now sixteen, and Sebastian who was now fourteen, were in a different school since they were already in high school.  Alley held open the door to the butcher as the others entered.  He whispered to Henry, “Do you have the money that mama gave us?”    Henry searched his pockets until he found the precious coins.  “What are we buying today?” Pia asked.  “1 pound of chop meat and eight links of sausage.” Henry responded.  Cheese hung from the ceiling and meats lined the shelves as they waited in line for their turn.  Emilio started to touch the bags of pasta that were on the center table.  Allie instructed, “Pia, hold Mimi’s hand so that he doesn’t touch.”  Henry placed the order and they waited while the butcher packaged the meat.  Mimi asked, “Can’t we get some candy at the five and dime?”  “No, there isn’t enough money. When grandpa comes back from his visit, he will bring some candy for all of us.” Henry explained.

The children walked another block before they entered the building.  They walked up two flights and noisily entered their apartment.  Once inside, the children saw their mother and grandmother crying and their voices died away.  Nana was holding a letter and her tears were falling on the words and blotting the ink.  Maria wiped her eyes with her apron and took the package of meat and placed it in the icebox as she instructed them to take their shoes off and to go to their room to do their homework.  Pia asked, “But mama, why is nana crying?”  Rosa, Maria’s mother let out another sob and Maria went to comfort her.  At that moment, Angelina and Sebastian walked in and stopped in their tracks as they saw the scene before them.  “What is it?” Angelina asked.  Maria finally explained, “We just received a letter from my cousin in Palma, grandpa is not coming home.  He passed away the day before he was supposed to return.”  “What happened to him?” Angelina pressed.  “All we know is that there was a party and the next morning, he didn’t wake up.  He died in his sleep.”

“What are we going to do?” Sebastian asked.  He knew that the family depended on Grandpa to work and support the family.  Even with his mother working at the chocolate factory, without Grandpa, there wouldn’t be enough money.  “Nana and I have been trying to figure that out.  Angelina and you will have to leave school and go to work.  Henry can stay in school for now.”  “What about us?” Pia asked.  There is an orphanage that will take you and Mimi until I can make enough money to bring you home again.”  Alley stood still, his name was not mentioned and he didn’t know what that meant.  “And me?” he asked.  “Zi’ Funz, your father’s brother, has offered his home to you.  You are his namesake and he’d like you to go live with him.  He and Zia Maria have no children of their own.”

Two weeks later, Alley prepared to move to his uncle and aunt’s house.  But the day before he was to move there, a tragedy unfolded.  Zi’ Funz’s brother-in-law, Antonio, who was married to Zi’ Funz’s sister who lived in Italy, decided that he wanted Zia Maria to elope with him.  Knowing that the boy was supposed to come live with Zia Maria the next day, Antonio came to their home and told Zia Maria that she must leave a letter he had written for her husband and that she must run away with him.  Zia Maria didn’t want to go with Antonio but Antonio had a gun.  She backed away from him to the kitchen window.  As she tried to climb through the window to the fire escape, Antonio shot her.  Believing that he had killed her, Antonio turned the gun on himself.  But the bullet that had hit Zia Maria had ricocheted off of her bone corset.  Uninjured, she jumped to the next fire escape and broke the window of her neighbor’s apartment.  She ran right through the apartment and collapsed in the hallway.  The neighbor found a policeman outside and the police investigated further, finding Antonio dead in Zia Maria’s apartment holding the letter he had written for her to leave for her husband.  Zi’ Funz was called home from work at the factory where he varnished coffins.  Even the Brooklyn Eagle, the local newspaper, sent a reporter and an article was printed in the paper the next day!  Zia Maria would be fine, but it would be another week before Alley could go to live with them.

In the years that followed, Alley saw his siblings and his mother often.  Eventually, Maria was able to bring Pia and Mimi back home with her.  But Zi’ Funz and Zia Maria never did give Alley back to his mother.  Maria married again and had one more child, a daughter, Josephine.

Because they had no children of their own, Zi’ Funz and Zia Maria were able to send Alphonse to college.  He attended Columbia University and studied to be a Pharmacist/Chemist.  While at college, Alphonse went with some friends to a dance at Columbia for the university’s  Italian American Inter-Collegiate Society.  He noticed a pretty girl sitting with her friends.  She felt his eyes on her and she met his gaze with a boldness that only comes from confidence.  Intrigued, Alphonse approached her and smiled.  She smiled and spoke in French to her girlfriend.  Puzzled, he asked, “French, at an Italian American meeting?”  She replied, “I am a language major at Hunter College.”  Alphonse introduced himself, “My name is Al.”  She replied, “I am Carolina, but my friends call me Lena.”

As they spoke through the evening, Carolina told Alphonse that she lived with her aunt and uncle.  She explained that they didn’t have any children of their own and that her father had given her to them.  She had come to America with her step-mother, brother, and three younger step-sisters.  The youngest of which, Eva, had died shortly after their arrival in New York.  Her father and step-mother had twins after that, a boy and a girl.  The girl twin had also been named Eva.  Carolina missed being with her siblings, but there were advantages to being the only child of her aunt and uncle.  After all, she was attending college.

Carolina (Lena) and Alphonse (Funzie) each lost a parent at a young age.  Both lost a little sister shortly after arriving in America.  Both grew up in the homes of an aunt and uncle, away from their siblings and natural parent.  Both had the opportunity to attend college because they were the only child of an aunt and uncle.  They were married in 1927 and they had three children, thirteen grandchildren, many great grandchildren and great-great grandchildren.  Nothing was as important to them as family.  They enjoyed watching their family grow and their home was the center of family gatherings for many years to come.  Alphonse passed away on October 13, 1991 at the age of 90 and his wife followed him almost exactly a year later.  She died on October 17, 1992, at the age of 89, a year to the day of her husband’s burial.  After her death, her half-sister, Eva, the twin, told me that Carolina’s mother, Aida, had died giving birth to her.  Eva’s mother, Angelina, had told Eva the truth, but told her it was to be kept a secret from Carolina. However when we uncovered a registry from the town where Carolina was born, it revealed that Aida died two years after the birth of Carolina.  Perhaps she did die in childbirth, but it was not the birth of Carolina.