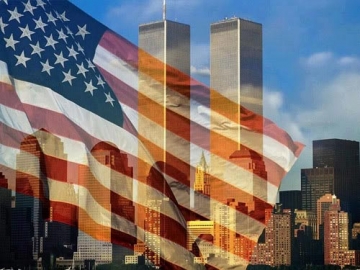 We all remember where we were when we heard or saw the planes hit the World Trade Center. I saw the first tower burning after placing my kindergarten son on a school bus during his first week of school.  Then I saw the second plane hit the second tower. Then we all knew this was an attack.  The talk on the news stations went on to question if the attack possibly included biochemical warfare weapons.  Were toxic chemicals being released into the air while we watched in horror as the towers collapsed and thousands of people perished?  Was this tragedy going to spread across our skies?  The schools went into lock-down. Parents weren’t allowed to pick up their children.  When we could finally tear our eyes away from the television screen, we searched the sky toward Manhattan for any hint of an ominous cloud heading our way.

Then the Pentagon was hit, what was next? A plane went down somewhere in Pennsylvania. We knew now that no one was safe. The air traffic across the United States of America came to a halt. One of the busiest airports in the world is JFK International Airport on Long Island. For me, seeing and hearing planes overhead was part of the white noise, like cars passing in the street and the sound of a train’s whistle. But when the planes disappeared from the sky, an eerie silence took their place. Fear spread and silence took over, even Broadway went silent.

What was next? That was what was on everyone’s minds. Were our water supplies safe?  Was someone dumping poison into the reservoirs the supplied water to New York City? The reservoirs in upstate New York were put under guard.

But then, voices began singing to fill the silent void.   People started singing, “God Bless America” and “The Star Spangled Banner” for the first time since I was a kid.  No one mumbled or stood silent in the baseball stands and countless other events, everyone stood and sang. They sang in parks and in schools.  Flags started to appear. They appeared on cars and on houses, they appeared on shirts and hats. People united and said, “We are Americans!  You will not take our freedom from us.”  We returned to work and school, we took mass transit and bravely returned to Times Square and the Empire State Building. Broadway turned on it’s lights once again.

And now the Freedom Tower stands where the twin towers fell.  I hope that we as Americans, will never forget our resolve that was reaffirmed after the silence.  That no one will ever take our freedom from us.